SAQA: A Sense of Humor Exhibit

Two of our SAQA Michigan artists, Beatrice Hughes and Robbie Payne have pieces in the SAQA exhibit, 'A Sense of Humor'.
Laughter makes the world go 'round' and this exhibition celebrates the laughable, amusing, comical, whimsical, incongruous, and absurd aspects of humor. The exhibit will debut at the International Quilt Festival in Houston from October 15-18, 2009 at the George R. Brown Convention Center. The exhibit will then go on to the IQA shows in Chicago and Long Beach in 2010. This exhibit was Juried by Pam RuBert.
'Ties at the Office' by Beatrice Hughes 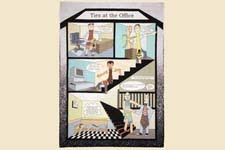 'Waiting to be Kissed' by Robbie Payne 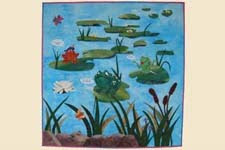 Welcome to the SAQA Michigan Blog!

The Michigan Region of SAQA (Studio Art Quilt Associates) is here to support and promote professional fiber artists and teachers as well as quilters working to develop their fine art skills.

Be a 'Follower' and get email updates of new postings!